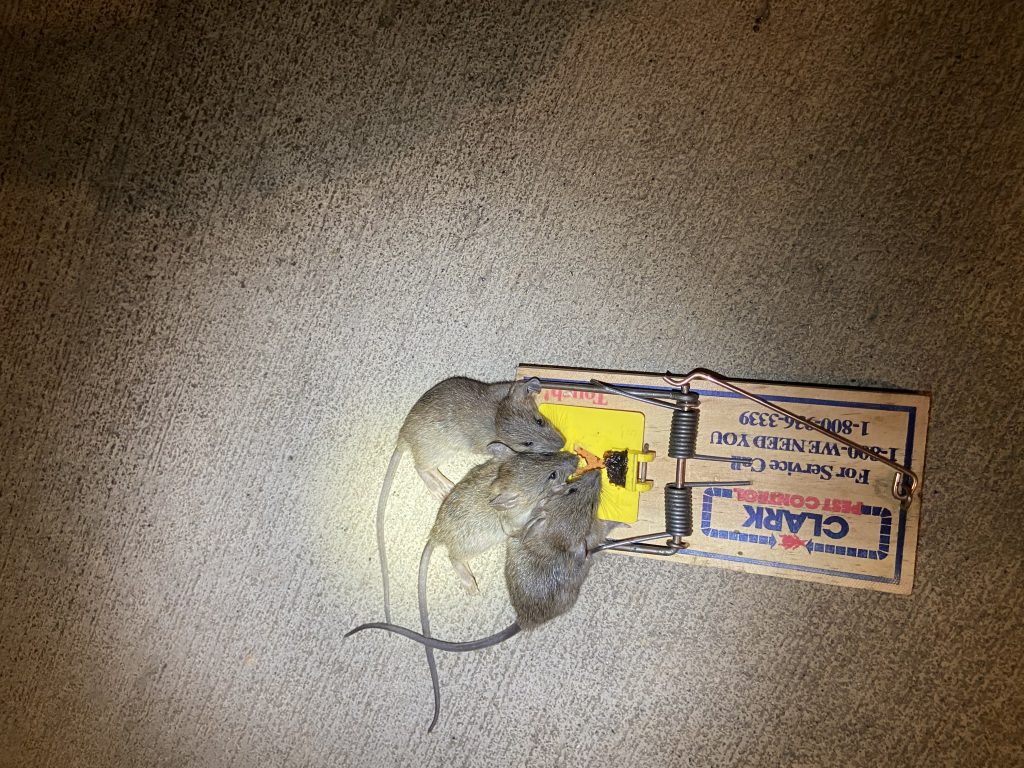 They’re under the dinner table, in the planters, and pretty much everywhere else you look during an outdoor meal. But are there really more rats than before the pandemic?

When the outdoor dining parklet at a buzzy Brooklyn wine bar recently started to smell funny, the owners didn’t think anything of it. “All parklets smell weird now,” said the restaurant group’s director. “It’s the Wild West.” But on a particularly sunny almost-winter day, with the sun beating down on the outdoor setup, it started to smell particularly… rotten. It seemed something had died in the raised space below the parklet’s wooden floor, and there was no easy way to get to it — “without literally ripping up the entire parklet,” says the restaurant director, who asked to remain anonymous, to avoid becoming the face of a story that is, admittedly, kind of gross.

After an entire day of deconstruction and thousands of dollars in material and labor costs, a carpenter pulled a dead rat from below the parklet, and then put the wooden floor back together. “Moving outdoors has exposed the restaurant in general to so many issues that we just did not think about as we endeavored to build a business back during the pandemic,” says the restaurant director. “This summer rats started to come out from the subway in a way that I’ve never seen in my 10-plus years in New York.” At another popular Brooklyn restaurant, the state of rats under the outdoor dining structure got so bad that, according to a garden designer and landscaper, “they had to rebuild the floor to clear out what was underneath the floorboards.”

The problem wasn’t limited to New York. In March 2020, a New Orleans resident told CBS News that they’d watched a swarm of “about 30 rats at the corner, feasting on something in the middle of the street,” saying they’d never witnessed anything like it. In Chicago, too, packs of rats departed from their regular nighttime feeding patterns to search for food during the day. In Los Angeles, demand for one woman’s pest control services exploded during the pandemic. By November, there had been more than 21,000 sightings of rats reported to 311 in New York City — a steep incline from 2019 and the years prior, according to the New York Times. The stories are similar around the country: As food sources became scarce, rats got hungry — and bold.

Rats, of course, always make their presence known wherever there are scraps of food to scrounge. If you live in a big city, there’s nothing particularly shocking, or at least unusual, about seeing one scurry through a pile of garbage or across the sidewalk, mostly keeping to itself as you both go about your business. To anyone who’s spent the past year dining outdoors, though, this extremely ratty moment feels distinctly different. But are there really more rats scurrying around our cities since the pandemic? Or, as we’ve set up camp to eat on sidewalks and streets and wherever else space allows, are we just more aware of the critters that have been there all along?

According to one expert, it’s actually possible that rat populations declined during the pandemic. Bobby Corrigan, an urban rodentologist, told KCRW that he reckons that while “there’s far fewer rats because of this pandemic because it puts so much stress on rat colonies,” changes in the availability of food sources (our food sources) shook up their feeding patterns — and sent them out into the streets in broad daylight.

While the pandemic had all of us developing new eating schedules and generally living in pretty strange ways, rats were also reacting to an odd new world. First, with restaurants closed and everyone at home, they had nothing to eat, and were frantically searching for food. There were horror stories of starving rats cannibalizing one another. Then, as restaurants reopened and diners spilled into makeshift outdoor dining setups, food was once again plentiful. And suddenly, the rats were everywhere, scampering over feet, jumping out of bushes, and popping up on every street where there was food to be eaten.

After seeing a big one run under a maze of tables in New York, one diner recalls that they “decided to eat somewhere else that night.” Another restaurant-goer in New York’s Upper East Side remembers their birthday last summer, when after dropping a “healthy amount of coin” on a fancy dinner, they spent the evening in the company of mice and rats that ran around and over their feet through the entire meal. “I’ve seen them much more than usual,” the birthday diner says. “They like dining outdoors too!” On a recent bar night with a friend, I sipped my gin and tonic as a constant stream of cat-sized rats charged back and forth within a foot of our otherwise lovely outdoor setup.

According to Dr. Brittany Campbell, a research scientist and staff entomologist at the National Pest Management Association, rats really are behaving differently than they might have before the pandemic. “It’s definitely alarming to see the increase in rodent activity that we’ve had due to the pandemic,” says Campbell, who echoes Corrigan’s assessment of the situation. “I don’t necessarily think rodent populations are booming,” she says, “but I think there was just an increase in activity, because now rodent behavior changed, and they’re going out during the daytime, they’re going and searching for new foods.”

While Campbell and Corrigan don’t believe that rat populations grew during the pandemic, there’s no denying that rats are everywhere right now. Their more visible presence even helped to spur a lawsuit filed by a group of New York residents in an attempt to force an end to pandemic-era outdoor dining. Since the construction of nine outdoor dining setups on her street, wrote Kathryn Artnzen, a Greenwich Village resident involved in the lawsuit, “Garbage pails overflow and big black garbage bags are always piled up next to restaurants and the shed and, because of this, the rat population has grown immensely. Rats have made homes under the sheds and in the planters surrounding the sheds, creating a very unsafe and unsanitary condition.” Rats are mentioned dozens of times throughout the lawsuit, with one petitioner describing “scores of rats’’ descending on her street.

While there’s no denying that the explosion in outdoor dining has had some impact on where rats live and when they come out to eat, it’s misguided to put the blame for dirty cities or bustling rat populations on restaurant owners alone. The rats in Artnzen’s neighborhood weren’t necessarily a sign of carelessness on the part of restaurants. Instead, data suggests that as restaurants first closed and many people hunkered down at home to weather the pandemic, rats increased their hunting radius, going further to look for food. Hungry and willing to travel during the daytime for their next meal, they became regulars on many of our blocks for the first time.

“I think there was a lot of panic in rodents [when restaurants shut down at the beginning of the pandemic],” says Campbell. ”They were not finding food sources, they were becoming much more brazen in the beginning, coming out [in the] daytime. Pest control was deemed essential, so a lot of our pest control workers could still get out there and work — thank goodness, because rodents are a public health threat.”

But even as rodent control measures are put in place, Campbell says issues — many of them quite difficult to avoid — still remain for restaurants and other businesses that are operating outdoors. “One of the control measures we use for rodents is what we call ‘mechanical measures’ or ‘exclusion,’ basically trying to keep rodents out of buildings. But you can imagine when we’re outdoors, if there’s a nice patio, there’s no barriers to the rodents,” Campbell explains. “So you may not see rodents indoors, because they can’t necessarily find entry, but a rodent can run and scurry across a patio pretty easily because there’s nothing blocking them from getting in. Diners have probably seen an increase in rodent activity, which is going to directly impact restaurants, even though they may have [preventative] measures in place.”

Luckily most diners seem to accept that restaurants are more or less powerless when it comes to controlling rat populations outdoors. “People are super gracious and they just appreciate that we’re still open, and they kind of laugh it off,” says the Brooklyn restaurant director who had to contend with the decomposing rat. “I do think in general, there’s a limit to how much we can protect guests outdoors from the whims of nature. We’ve considered building more permanent structures outdoors to keep it super tight and locked up, but then you’re basically dining indoors, and we don’t want to do that. We want to have options for people who are uncomfortable eating inside. There’s definitely a trade off.”

For now at least, rats are likely to continue scampering around many of our favorite restaurants’ outdoor setups. But if you see one dart under your feet when you sit down, know that it doesn’t necessarily indicate a dirty kitchen or any shortcoming on the restaurant’s part. That said, Campbell does caution that rats can carry a host of diseases, and if they’re crowding your space, it might be worth relocating and mentioning it to the restaurant — in a gracious, understanding way, of course.

Eventually, barring any unforeseen public health circumstances like, say, a new COVID variant, Campbell suspects rats will recede once again into the background of city living. “I think we’ll get back to a little bit less activity and [fewer] sightings, with people being able to go indoors [to eat]. And we’ve been able to really revamp our pest control, the professionals are being allowed back in most of the commercial facilities,” she says. “So I think we’re starting to see the population leveling out. As long as we don’t have to go back to drastic measures, I think we should be back to where we were with rodents. Hopefully soon.”